The third quarter came to a close yesterday. And what a rollercoaster quarter it was. The S&P 500 Index rallied 13.6% from July through mid-August as investors anticipated a pivot from the Fed’s aggressive hiking path. But the idea was quickly dashed in the second half with Fed Chairman Powell’s comments from Jackson Hole. Markets responded in turn and from mid-August through yesterday the S&P 500 Index dropped -16.5%, putting the YTD returns at -24.8% and a new 52-week low.

Some Thoughts on Inflation:

Fed Chairman Powell made it clear in August that the Fed is committed to taming inflation despite the pain felt by households and businesses in the near term. And the Fed’s hawkish stance was reiterated in their September meeting with a third consecutive 75 basis point increase, putting the target Federal Funds rate at 3.00% to 3.25%. Median projections for the year-end increased to 4.4% and are expected to top out at 4.6% sometime in mid-2023. 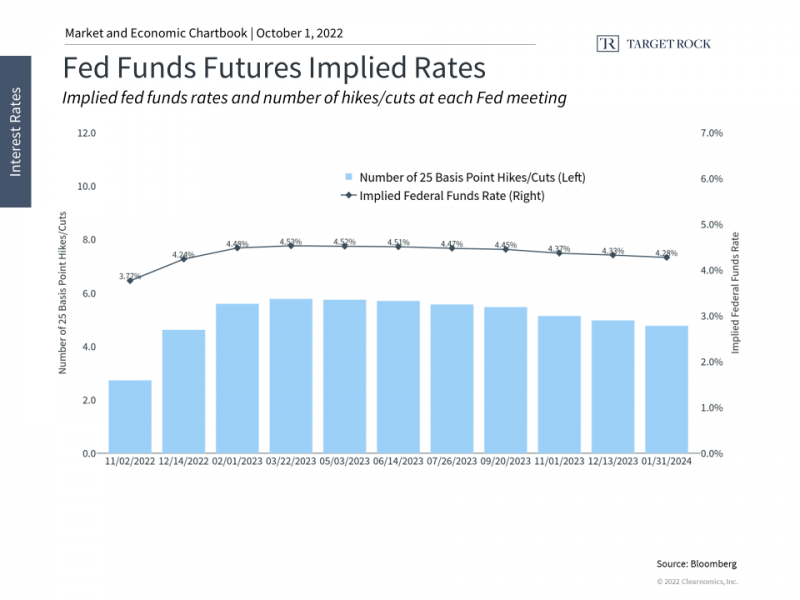 The Fed is in part attempting to avoid inflation expectations becoming engrained in our economy, such as what happened in the 70s and early 80s. We don’t foresee this type of sustained inflation occurring and instead view this as a pandemic-driven combination of a surge in demand, shortage of supply, as well as expansionary monetary and fiscal policies.

The Fed’s policies will address many of these inflationary drivers and the supply issues will get resolved in time. While the Fed policy’s effect on inflation has been slow, and it is unlikely we will see the targeted 2% very soon, there are some encouraging signs of relief. 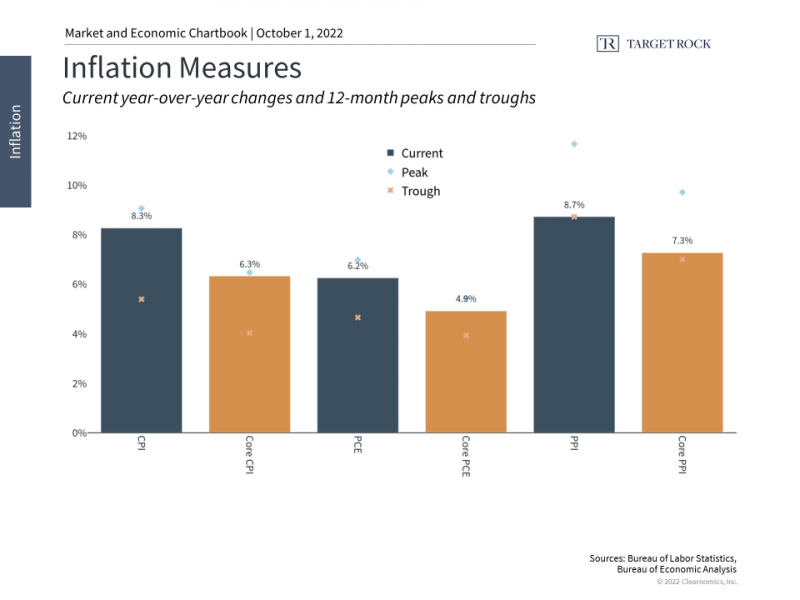 Most measures of inflation appear to be past their peak. The Fed’s preferred measure, the Core PCE Index, now stands at 4.9%. 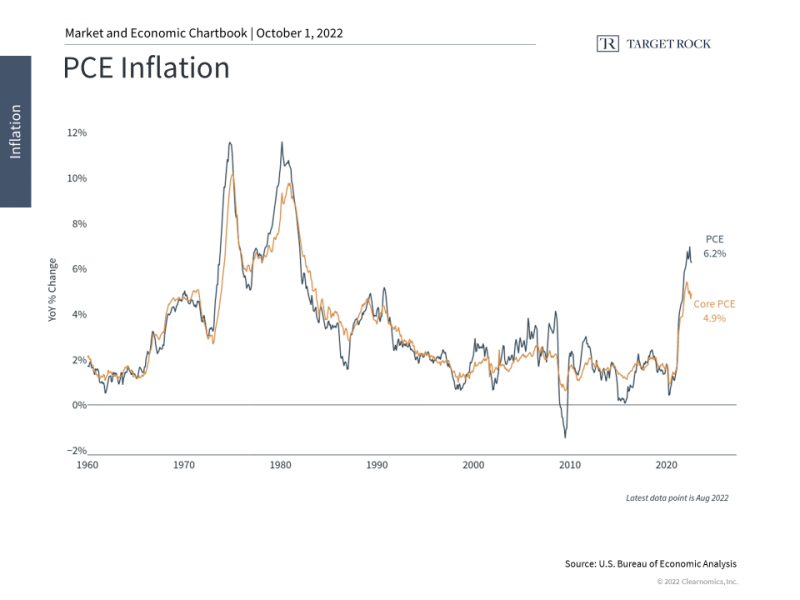 There are also some promising data points suggesting continued moderation in inflation. Here are a few: 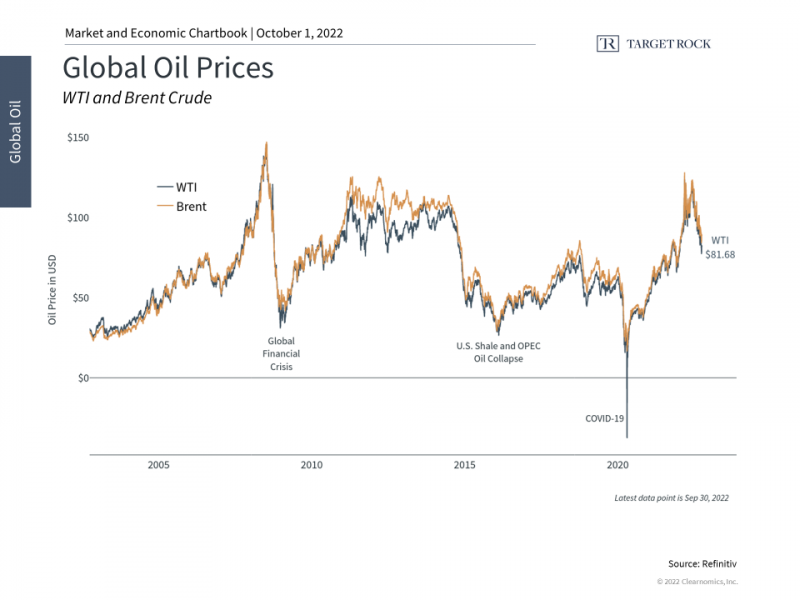 Oil prices have come down and now sit around $80/ barrel, a 35% decline from the March peak and below its pre-Ukraine invasion price. This is translating into declines in gasoline prices, shipping and transportation costs, and contributing to a 14% drop in airline fares vs the May peak. (J.P. Morgan Markets report, “Under the Hood” dated 9/20/22). We expect lower input prices will continue to flow through to other areas of the economy over the coming quarters. 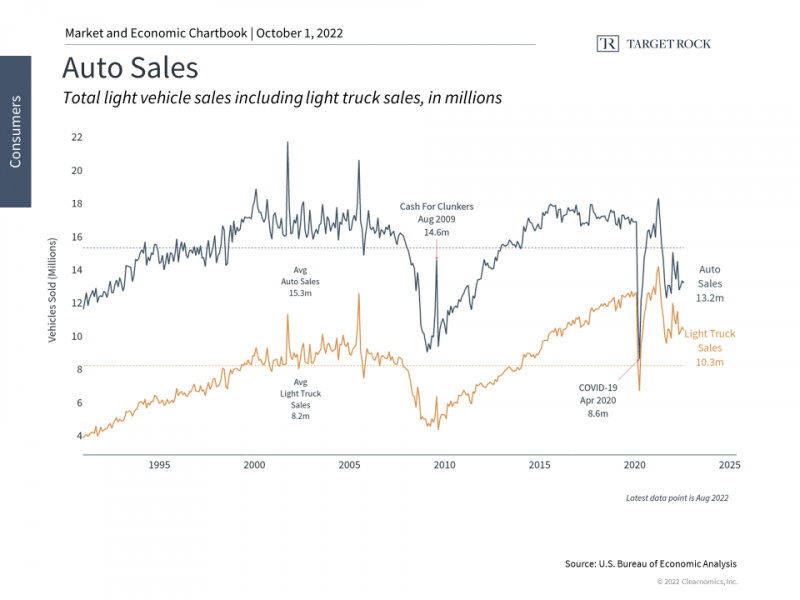 Auto sales have declined. And with easing demand for autos as well as improvement in semiconductor supply, we expect prices to moderate. 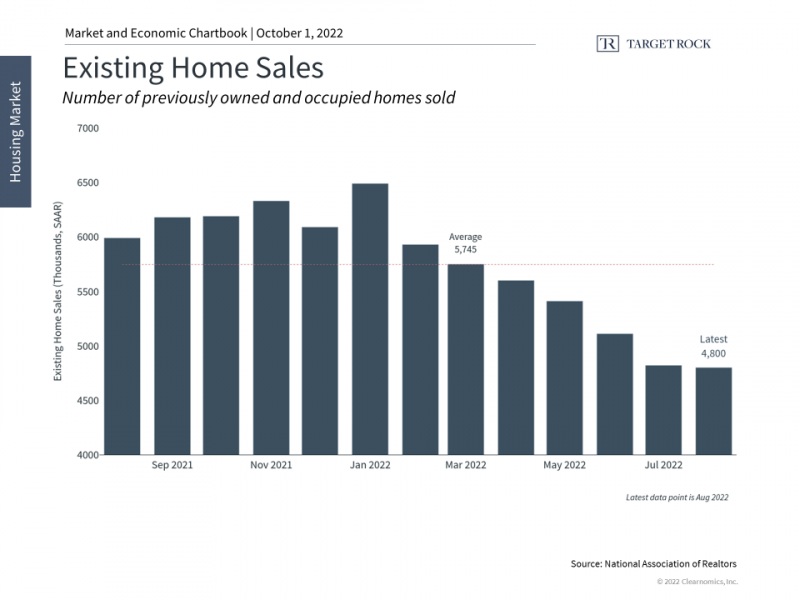 Home sales are falling. Rent payments represent a large portion of the overall inflation index, hence the Fed’s focus on a correction in the housing market. The sustained low-interest rate environment and government stimulus drove real estate sales and prices significantly higher. But with borrowing costs now hovering around 7%, that trend has reversed.

While home prices are more “sticky,” the more than twofold increase in borrowing costs will likely have a significant impact on prices. We expect home prices to decline and start to translate into lower rents, which typically lag sales by about 12-18 months. So, while it will take a little longer for rental prices to adjust, we are starting to see early indications.

In sum, market-based measures, consumer surveys, and professional forecasters all anticipate that inflation will be tamed over the next few quarters.

We don’t try to time the market. Instead, we aim to make thoughtful and measured decisions based upon risk-return tradeoffs of multiple potential future outcomes.

Markets have reacted swiftly to tighter monetary policy conditions, with short-term government bond yields spiking to 15-year highs. A portion of our fixed income sleeves has been allocated to low volatility bond alternatives to hedge the risk of rising rates. As we believe we are entering peak Fed hawkishness where markets have priced in most of the Fed’s moves this tightening cycle, we are stepping back into bonds.

In equities, we have been tilted towards value stocks, which tend to perform better in inflationary times (their earnings are not as far out in the future as growth stocks). 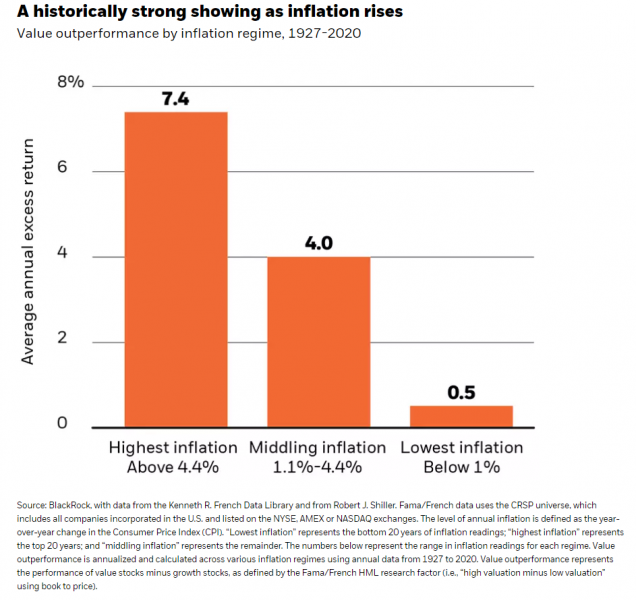 International developed markets have been impacted to a further extent than the U.S. by the war in Ukraine, inflation, and slowing growth. However, we remain underweight vs the global benchmark, and our decision to mitigate potential risk with a currency hedged position has helped.

Despite being underweight bonds thanks to our alternatives allocation, we continue to hold a small position in long-dated treasuries. While the sharp decline has hurt, we hold it for a very particular reason. Long-dated bonds have a very strong negative correlation with equities. As a result, they can perform very well if we enter a severe recession. We hold these in case the Fed’s landing is not as soft as we all hope it will be.

Overall, the above factors have contributed to a favorable relative performance. I fully realize relative doesn’t always make you feel much better – but again, if we can avoid big drawdowns in these bear markets, we start in a better place during the next bull market.

We expect the impacts of higher interest rates to become more evident in housing weakness, rising unemployment, and lower consumer spending. While we don’t like expecting negative economic data, this will enable interest rate, and in turn, equity market stabilization. 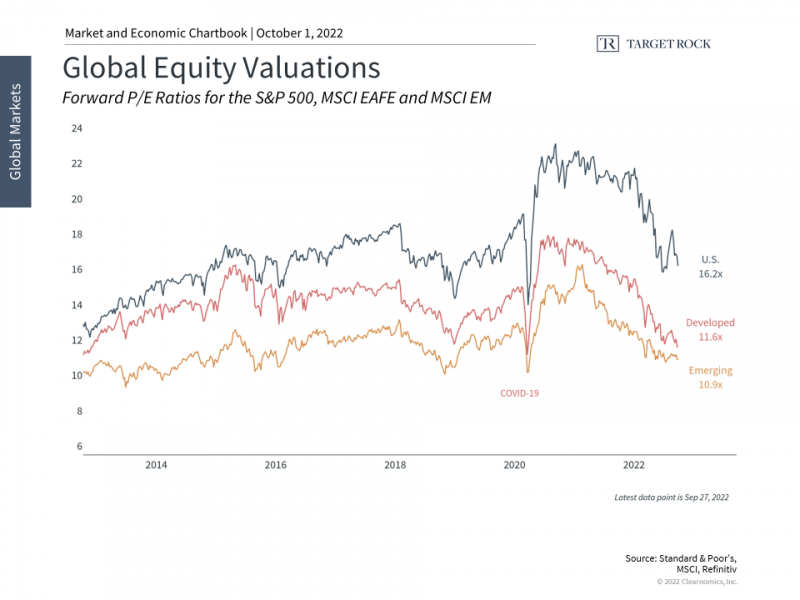 The S&P 500 Index is trading at roughly 16x 2023 earnings estimates. This is more in line with long-term historical averages. However, 2023 estimates are still calling for about 8% earnings growth, which may be a little optimistic given the wide range of potential economic outcomes. But market indices aren’t too far away from trading at reasonable valuations, even with a pessimistic assumption for earnings in 2023. We are maintaining our current equity allocations and will keep you informed if anything changes between now and year-end.

It’s certainly been a tough quarter and year so far but remember – after every bear market is a bull market.

Hope you enjoy the rest of your weekend and look forward to speaking with you soon.

Bring on the babies: college saving for new parents