By Matthew McKee and Adrian Colarusso

Given the dramatic change to market conditions, we are pulling our Q3 update forward and reviewing our investment positioning for the quarter ahead.

Now is the time to remember that volatility is a feature and not a bug of financial markets – and what you are rewarded for as a long-term investor.

And even though we’ve seen the worst start to a year for the S&P 500 since 1970 and, arguably more painful, a pullback in bonds where investors typically find safety, our baseline allocations have done well.

Going into 2022 we were in a state where every asset class was priced to perfections. Much of this was due to the enormous monetary and fiscal policy support put in place. However, we faced the prospect of the Fed raising rates and reducing its balance sheet to address inflationary pressures.

We were convicted that the valuations of large U.S. companies, particularly growth-oriented technology companies, were stretched and particularly vulnerable to rising interest rates and therefore made the strategic decision to tilt towards value within the U.S. (less interest rate sensitivity). 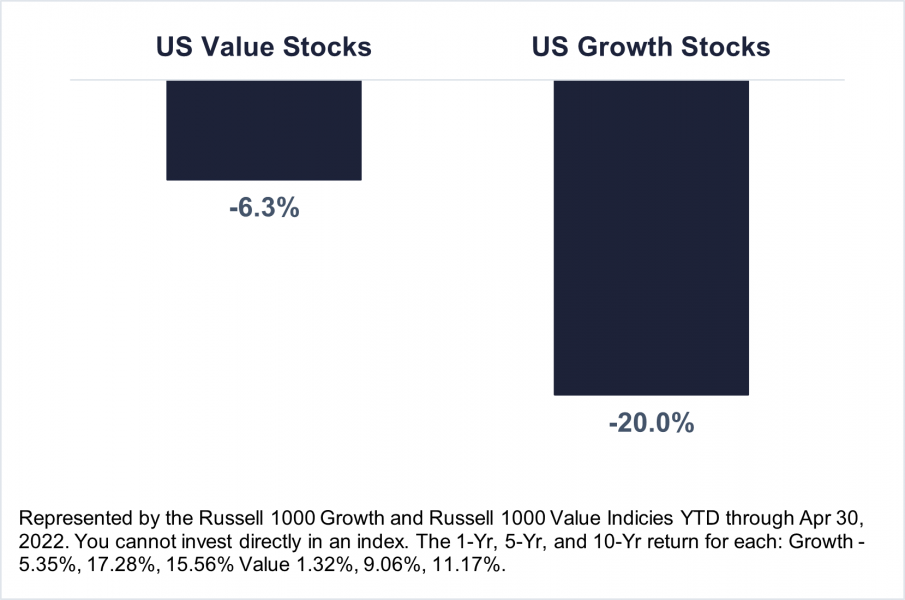 Along a similar viewpoint of broader U.S. equity valuations, we are also overweight international developed markets. But given the dollar-based profile of our clients, used a currency-hedged allocation for a portion of this exposure. Clearly, no one saw a war coming but the flight to safety in the U.S. dollar contributed significantly to our relative performance. 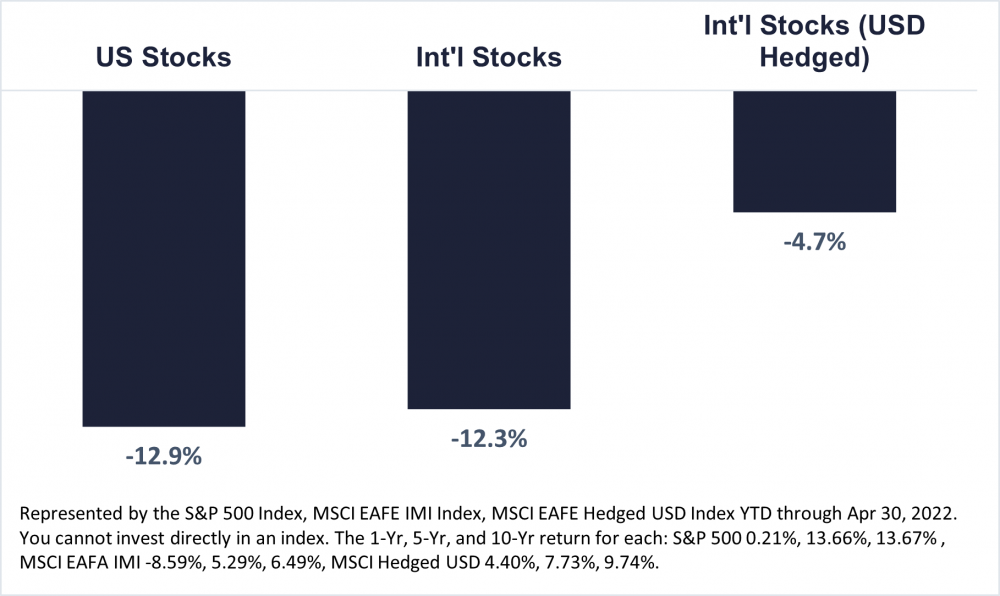 Rising interest rates were obviously a concern on the bond side of our portfolios as well. We reallocated a portion of our bond sleeve to alternatives such as merger-arbitrage and market neutral strategies that have similar volatility profiles to bonds but with less interest rate sensitivity. The returns in these funds have been roughly flat, which given the backdrop appears stellar.

We also added commodities as an inflation hedge, which worked as intended. In fact, although it was a measured, small position, it not only cushioned the blow when everything was falling, but YTD is up ~42%.

There are things that didn’t work. Clearly, bonds, which we can’t avoid altogether, were hit hard by the rise in rates. Long-dated Treasurys were hit particularly hard, but we held them and are maintaining this small position in the event of a recession. Holding long-dated bonds allows us to provide a similar protection to recessionary risks with a smaller amount of capital dedicated to bonds.

We realize relative performance doesn’t necessarily make you feel better when your portfolio is down. But when we can protect during these periods, we start at a better place during the beginning of the next bull market.

So what do we see going forward?

There’s a lot of uncertainty out there. The Fed is expected to hike rates into 2023, COVID continues to disrupt supply chains in China, the war in Ukraine is impacting commodity prices. Given this backdrop, media pundits are increasingly talking about the risk of recession in the U.S.

Yet on the positive side, the consumer balance sheet is strong, and unemployment is at historically low levels with today’s May job report coming in better than expected. Leading economic indicators and economic activity indices also remain in expansionary territory. 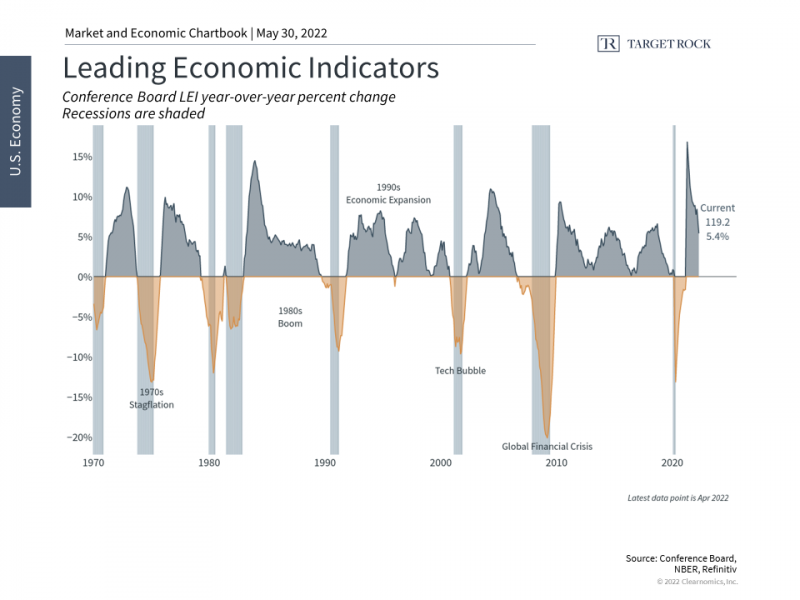 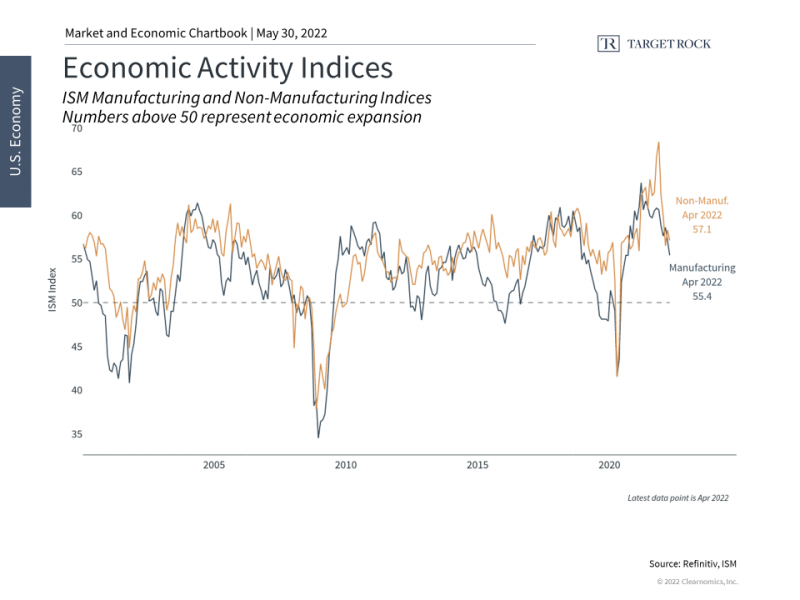 Our role is to position our client portfolios not for one particular outcome, but to prepare them for a range of possible future states of the worlds – not to time markets, but to thoughtfully and methodically allocate capital to where we see the best risk and return dynamics given a multitude of potential outcomes.

We are positioning portfolios to participate on the upside but have resiliency on the downside. In other words, we have been moderately defensive and will continue to be so for the coming quarter. Under the hood, we are making some adjustments given the change in fundamentals.

As mentioned earlier, bonds, particularly long-duration Treasurys, have not performed well this year. Fortunately, we have been underweight bonds. However, today’s higher yields are attracting us back. We are taking profits in our commodities position and starting to ease back into bonds. We are seeing value in shorter maturity high quality corporate bonds and certain segments of the high yield market. 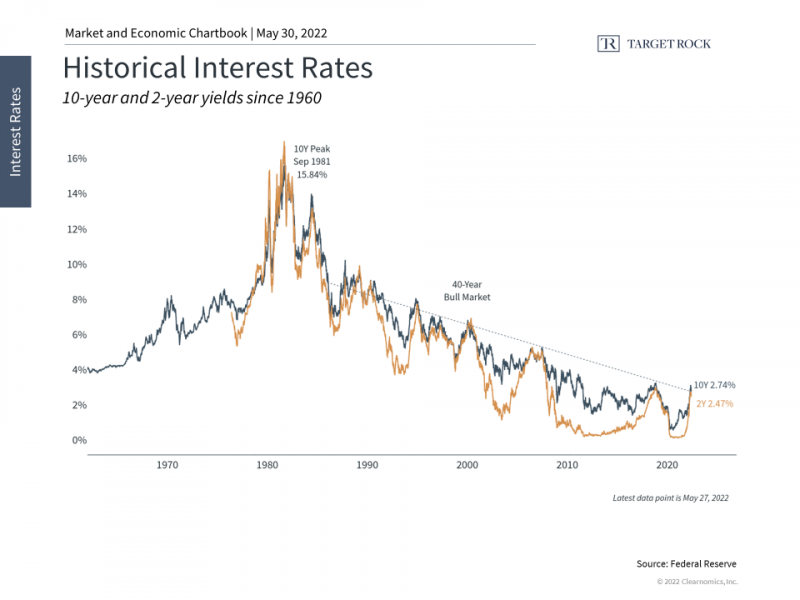 While small caps have performed better than large so far this year, the pullback in each is more attributable to interest rates and multiple compression, and not necessarily recessionary concerns. Going forward, if recession fears increase, small caps are typically more sensitive. As such, we are repositioning a portion, as well as some of our core large cap exposure, into high-quality stocks within defensive sectors of the economy, such as financials, health care, and consumer staples. 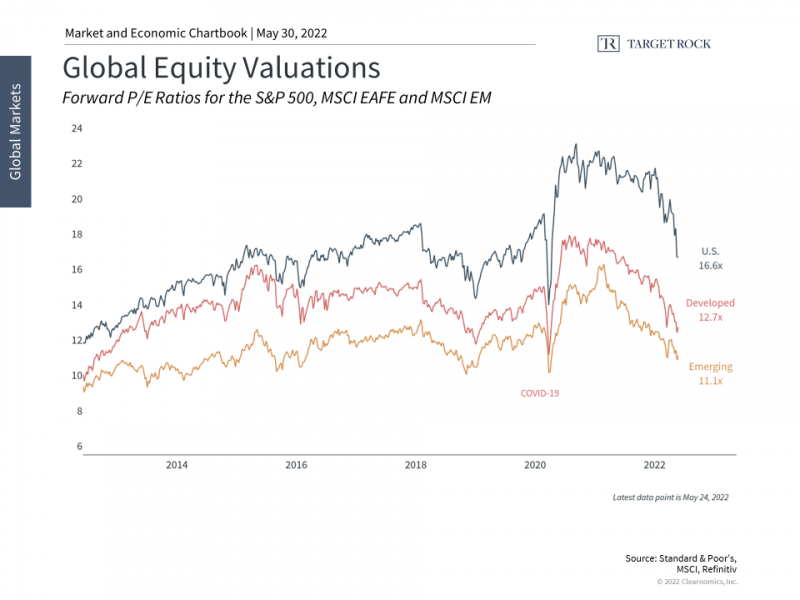 It’s been a rough start to 2022 but, as always, we continue to keep a close eye on market developments and what it means for our client portfolios. If you’d like to discuss your investments in more detail, please feel free to reach out.

Bring on the babies: college saving for new parents